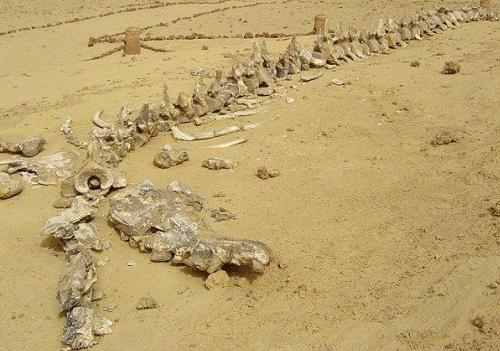 Whales Valley is 60 km south of Wadi EL Rayan in Fayoum oasis 150 km from Cairo. Wadi Al Hitan is an open air museum dates back to 45 million years, discovered in 1936, announced in 2005 by UNESCO as world heritage site.

There is another even more ancient Egypt that is known to very few people. Wadi Al-Hitan is a paleontological site in the Al Fayyum Governorate of Egypt. This is a remote valley in the Western Desert of Egypt, features integrated desert environment of wild animals, sea fossils, sand dunes, springs , desert plant groups, reptiles & birds.

Only about thousand visitors a year to the site, they only reach wadi Al-Hitan by 4WD as the track is unpaved and crosses unmarked desert sands. The foreigners are the most of wadi Al-Hitan visitors. They usually camp in the valley on winter weekends.

Being part of Wadi El Rayn national park; Wadi El-Hitan is managed by the same protection management that restricts visitors to prearranged guided tours along a prescribed trail.

Wadi Hitan is a remote valley in the Western Desert of Egypt. The site today is a protected area and a natural Heritage Site added in 2005 by the UNESCO as world heritage site.

There is considerable evidence which indicates that the basin of Wadi Hitan was submerged in water some 40 to 50 million years ago.  A fossil remains of the first primitive whales and ancestors of the modern day whales. The remains display the typical streamlined body form of modern whales, yet retaining some of the primitive aspects of skull and tooth structure.

The whale is called Ambulocetus natans, moved easily between land and sea. Roughly the size of a walrus, this primitive whale inhabited coastal environments. These new fossils also provide insight into how these animals got around. No other place in the world yields the number, concentration and quality of such fossils, as is their accessibility and setting in an attractive and protected landscape.

Despite more than 100 years of studying this area, no complete restoration of a Basilosaurus has ever been made. This has been finally changed due to the recent discovery of a complete 18 meter-long whale skeleton. Over the years, researchers have found that the excavated skeletons show evidence of the last stages of evolution from land animals to a marine existence; the loss of the rear limbs and an alteration to the typical body form of modern whales while retaining certain primitive aspects of skull and tooth structure.

The valley is located behind a mountain, known as Garet Gohannam, (gara) means hill or mountain and Garet Gohannam means the mountain of hell. In the light of the setting sun, the mountain seems ablaze with an eerie red light drawing a fascinating scene.Wadi El-Hitan museum is located near Garet Gohannam north west of Wadi El-Rayan. There are 406 skeleton of primitive kind of whales in addition to the huge skeleton of Lizard whale which was discovered in 2005.