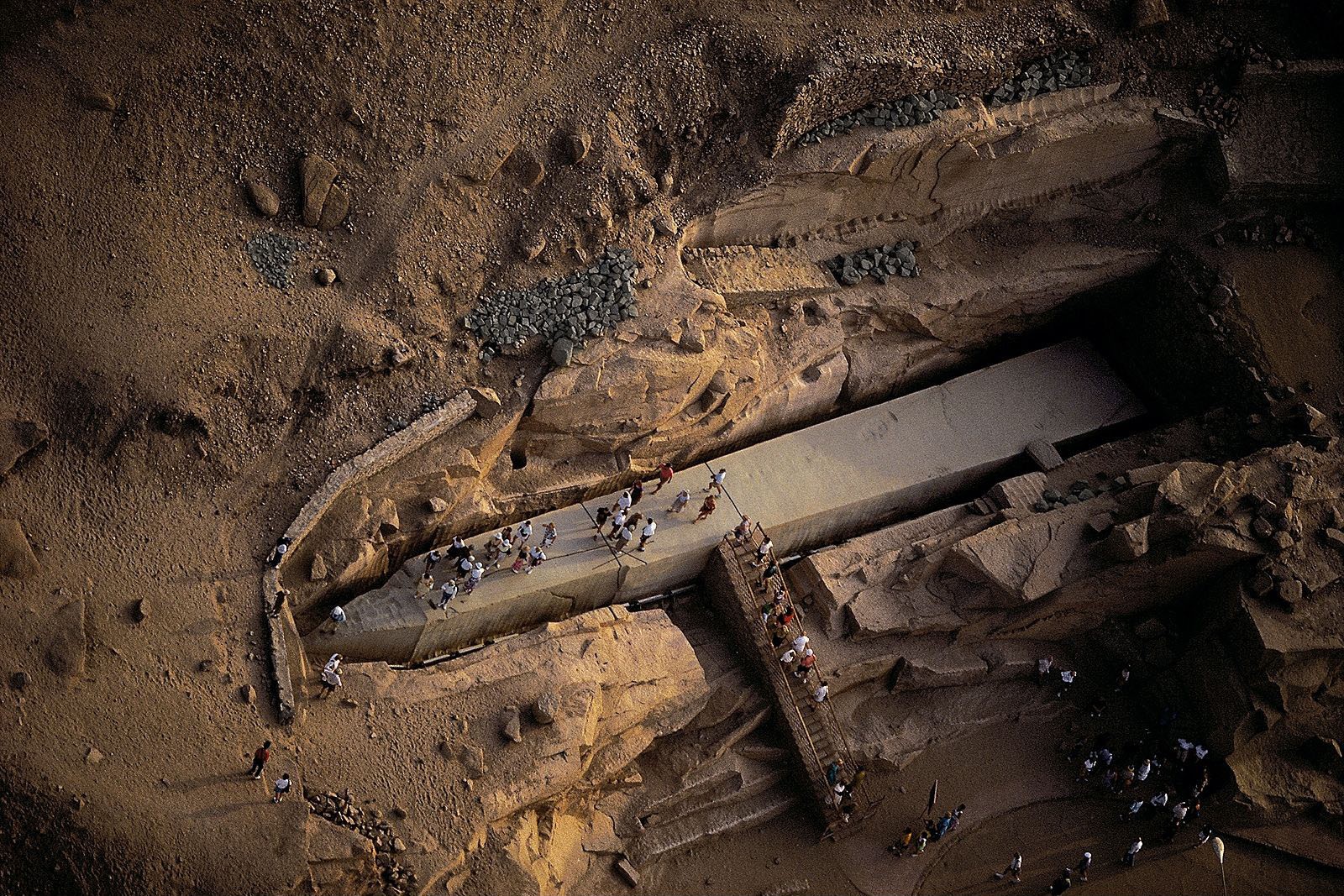 The Unfinished Obelisk is one of the popular sites in Aswan. Situated on the southern edge of the Northern quarry. Uncover the history of the abandoned Obelisk of Aswan Quarry, facts, dimensions and more about Hatshepsut Unfinished Obelisk Aswan Egypt.

The Unfinished Obelisk has been promoted to attract more visitors to Aswan providing unusual insights into stone working techniques employed by ancient Egyptians.

It would have been the greatest obelisk ever raised a monument worthy perhaps of "Wonder of the Ancient World" status. This is disputably the largest stone ever quarried and certainly on-par with the unfinished stone at Ba'albek, Lebanon.

Around these quarries are many inscriptions, many of which describe successful quarrying projects. However, the stone, still attached to bedrock, gives important clues to how the ancients quarried granite. Every rock face shows the imprint of ancient stone workers with many cut-marks or artists sketches still to see.

You can almost believe that the workmen have only just put down their tools and gone home for the night. This gigantic single piece of granite was intended to be an obelisk and is generally attributed to Queen Hatshepsut, being very similar to her obelisk in Karnak Temple in Luxor.

During the earliest ages, the Ancient Egyptians knew the so-called " Pn-pn", which was a pyramidal stone with a pointed top and according to their beliefs the "Pn-pn" symbolized the primeval hill from which the world first appeared. During the 5th Dynasty, the obelisk began to play an important role inside the temples of Ra; the obelisk being a sacred symbol of the cult of the sun.

The unfinished obelisk offers unusual insights into ancient Egyptian stone-working techniques, with marks from workers' tools still clearly visible as well as ocher-colored lines marking where they were working. Another quarry area to the south of the ‘unfinished obelisk’ has been in use since ancient times and is still in use today.

Walking up a rough track to the top of the hill many pieces of stone and boulders can be seen which have been partly cut from the surrounding rock, still showing cut-marks, though it is difficult to distinguish between ancient and modern workings.

Perched high on a hill in the Southern Quarries, with magnificent views over the Nile River towards the High Dam, is an open-air exhibition of modern granite sculpture, part of the Aswan International Sculpture Symposium which now a significant annual event in Egypt.