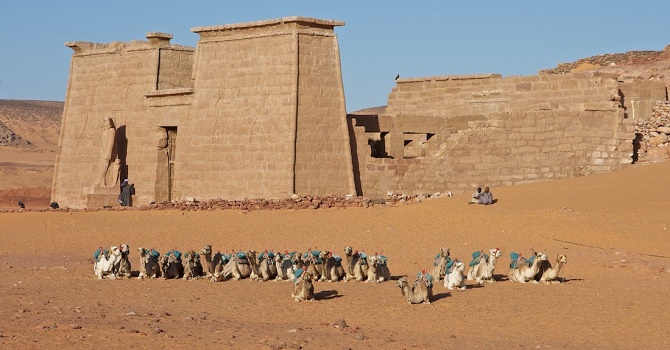 2 Egyptian temples were built in Wadi El Seboua during the new kingdom: a temple for king Ramesses II which was moved to the new site several Kilometers to North West, the earlier temple of king Amenhotep III was left in its original location & is now covered by Lake Nasser.

The Temple of Wadi El Seboua on Lake Nasser Aswan

El Sebua is about 140 km south of the new Aswan Dam on the west bank of the Nile. When, in the 1960s, the High Dam was being constructed, Two Egyptian temples were built here in the new kingdom: a temple for king Ramesses II which was moved to the new site several kilometers to the North West, and earlier temple of king Amenhotep III which was left in its original location and is now covered by Lake Nasser.

Both temples were partly freestanding and partly cut into the surrounding rock. The temple of Amenhotep III was dedicated to the first to a Nubian form of god Horus and later to god Amun. Damaged in the Amarna period, it was restored by king Ramesses II.

Ramesses’ own temple was dedicated to god Amun-Ra and god Rahorakhty and consisted of a sphinx-lined approach leading to a series of three pylons with colossi of the king fronting the remaining pylon of stone.

The court within also has ten statues of king Ramesses II, depicted in the heavy, rather rounded style often used in this area, engaged to its pillars. Within the rock a 12-pillared hall stands before a transverse vestibule and the sanctuary chambers.

The entrance to the central niche was decorated to show Ramesses II worshiping the gods within Amun-Ra, Rahorakhty and Ramesses II himself, but was changed by the ancient Christians, who converted the temple to a church, to show him offering to St. Peter instead.