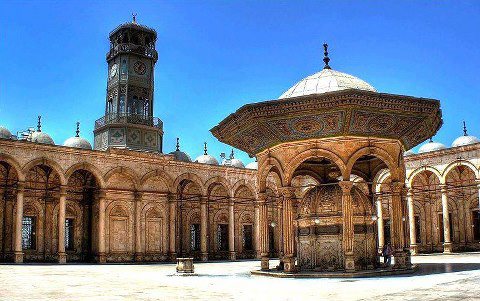 The Alabaster Mosque of Muhammad Ali is situated inside the open court of Cairo Saladin Citadel, designed by the Turkish architect Yousf Boushnaq in 1830 A.D as replica of Sultan Ahmed Mosque in Istanbul.

The great Mosque of Muhammad Ali Pasha or Alabaster Mosque stands proudly on the highest point inside the courtyard of the Citadel of Saladin. The Mosque of Muhammad Ali is the most popular Islamic mosque among tourists .It is one of the first features to be seen when approaching the city from no matter which side.

The mosque, the largest such structure built during the first half of the 19th century, is more impressive at a distance than close up .It is an unparalleled contribution to the skyline of Cairo, visible high atop the Citadel grounds.

The mosque is the Tomb of Mohammad Ali and is also known as the Alabaster Mosque because of the extensive use of this fine material from Beni Suef. Its two slender 270 foot minarets are unusual for Cairo.

From the arcaded courtyard, visitors have a magnificent view across the city to the pyramids in Giza. Just off the courtyard is the vast prayer hall with an Ottoman style dome which is 170 feet above.

The parapet to the southwest offers a good view of the Sultan Hassan and Ibn Tulun Mosques and of Cairo itself. Perhaps because of its location, it is one of the most frequented Mosques by tourists.

Ottoman law prohibited anyone but the sultan from building a mosque with more than one minaret, but this mosque has two minarets. This was one of Muhammad 'Ali's first indications that he did not intend to remain submissive to Istanbul. The mosque is classically Turkish in style, reflecting its Ottoman origins.

The interior also reflects some French rococo influences, and is finished with ornate lines of red, green, and gold. There is a gold-scalloped mihrab and two minbars (pulpits): one faced in alabaster and the other, unusually, in the Art Nouveau style. Muhammad Ali is buried beneath a white marble monument on the right of the entrance behind a bronze grill.

In the courtyard is an ornate clock given by Louis Philippe in exchange for the obelisk that stands in the Place de la Concorde in Paris. It has never worked.

for tourists having more than one day in Cairo they may visit Saladin citadel and the Alabaster mosque withing an organized guided tour to Old Cairo along with other Coptic and Jewish sites. One Hour would be enough to get some in in depth information about the site from your tour guide, getting also some nice pics of Old Cairo from their as the citadel is situated on a high hill overlooking Old Cairo. Foreigners are allowed to get inside the mosque, modest clothing is required ad camera is allowed.

If you choose to spend your holiday time in Egypt in any of Sinai or Red Sea resorts, visiting the Alabaster mosque is still possible if you plan a one of two days in Cairo. It is on your way to or from Cairo international airport even if you would not have time to get inside you may ask your guide for a photo stop for few minutes to view the outer wall of the citadel and the whole mosque for outside as it stands high in the middle of the citadel court.

The Alabaster mosque is a great Cairo sightseeing that you should not miss !