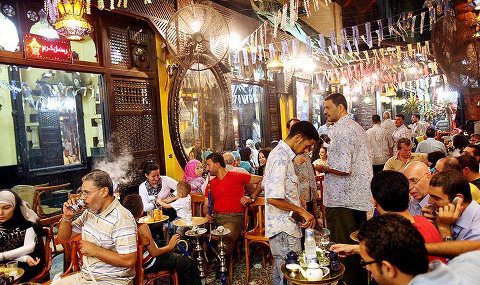 Khan El-Khalili is a major souk in the Islamic district of Cairo. It is one of the most interesting bazaars, not only in Egypt, but also in the Middle East. The Khan El Khalili Bazaar is one of the oldest markets in Egypt, begun in the late 1300s, the bazaar still operates and allows you to experience an exciting world where treasures can still be found. .

It's not just a tourist attraction; the many wares are of high enough quality to lure locals as well as those just visiting the nation.

Islamic Cairo is famous for its open air markets where vendors hawk their wares to anyone and everyone who passes by. Haggling is the order of the day and, once one gets used to it, it can be quite fun!

One of the most famous of these markets is the Khan El Khalili Bazaar. It's not just a tourist attraction; the many wares are of high enough quality to lure locals as well as those just visiting the nation. The market is famous for clothing, spices, traditional jewelry and perfumes.

The items are of high quality which is part of the reason that this market has survived for so long. The bazaar is far from a tourist trap, though there are plenty of souvenirs available. Many of the high quality cloths and other items made by local artisans provide the best souvenirs, however, as they are a part of Egypt's people and culture.

Open air markets such as Khan El Khalili Bazaar and the other markets in Old Cairo are called a "souk" in Arabic. The tradition of buying and selling, haggling and bargaining among the crowds is more than a consumer activity in Egypt. It's a great way to socialize and meet new people.

You'll find many tourists visiting the bazaar area and, given the fact that it's one of Cairo's major draws, you'll likely find more than a few from your own country as well. This Egyptian bazaar is a great place to while away an entire day. The sights and sounds are enduring examples of the Egyptian culture that have been going on for hundreds of years.

For a break from the heat, there are plenty of coffee shops along the street. Egyptians like their coffee strong, so be prepared for quite a jolt from their favored drink, but also prepare for some of the most exotic tasting coffee you'll ever have.