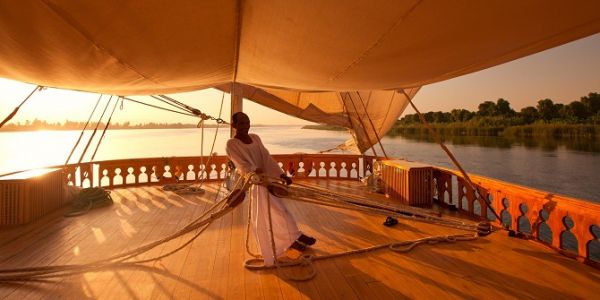 Experience Cruising The Nile by Luxury Riverboat. Pick Your Nile Riverboat Cruise from List of 2023 Traditional Nile Riverboats, It is the Experience That You Should Not Miss. Book Best Nile River Boat Tours Now Online.

If you want to explore the history of Egypt from a different perspective, you should consider a Nile River cruise. It will take you back to the days of the pharaohs, pyramids, and other landmarks. Luxor was once the capital of the Middle and Late Egyptian Kingdoms and is home to the famous Temple of Luxor. During your trip, you can tour the Pyramids of Giza, visit ancient temples, and enjoy the modern city life in Cairo.

The Nile is the longest river in the world. It flows through northeastern Africa, emphasizing its southern tip in the Mediterranean Sea. Many cruises on the Nile are incorporated into more extensive land-based excursions. They typically run round-trip from Cairo, allowing you to visit several sites that include the famous antiquities. With a Nile riverboat cruise, you can see the country's sights and get the most out of your vacation.

If you plan a vacation to Egypt, you may wonder which kind of riverboat to choose. Several options are available, but the Nile Riverboat is one of the most popular. There are also felucca cruises, which are traditional Egyptian sailboats. These traditional ships have been cruising the Nile for centuries. Unlike motorized riverboats, these boats are powered by wind so they can dock in remote areas without the usual infrastructure. In addition to basic accommodations, they have a shower and toilet on the support boat.

Today, some Nile riverboats are luxury cruise ships. They have facilities such as swimming pools and spas. Others are more traditional, like the dahabiya, which has fewer passengers but can dock at places larger ships can't reach. Some of these boats are so small that you can't see the locals.

When planning a vacation to Egypt, a Nile riverboat tour is one of the best ways to experience the country. These riverboats depart from Luxor and sail through quiet stretches of the river. They can accommodate six to eight people overnight. A felucca is a modified yacht with traditional sails. Smaller feluccas can accommodate just two or three people and are ideal for a day trip. Although a felucca is a smaller vessel, the experience is still unforgettable.

There are also Nile steamer cruises, which are reminiscent of 1920s-style riverboats. These luxurious cruises include many stops in Egypt. Longer Nile cruises are more affordable and are perfect for sightseeing in Egypt's major cities. You can even get daily tours from the cruise! A trip to Egypt's most famous tourist attractions is a must for all ages.

Is Nile river cruise worth?

Definitely YES! Egypt Nile Cruise is a great way to travel between the cities of Cairo, Luxor and Aswan. it's gorgeous, relaxing and you're doing something that people have done for 5,000 years.

Where to book Nile river cruise?

To book Nile cruise online you just need to have a look at the prices offered by companies and you’ll probably take a large and sharp inhale! We recommend booking Nile cruise from well established companies which operate private or small group tours.

How much is a Nile river cruise?

Luxor to Aswan by Boat